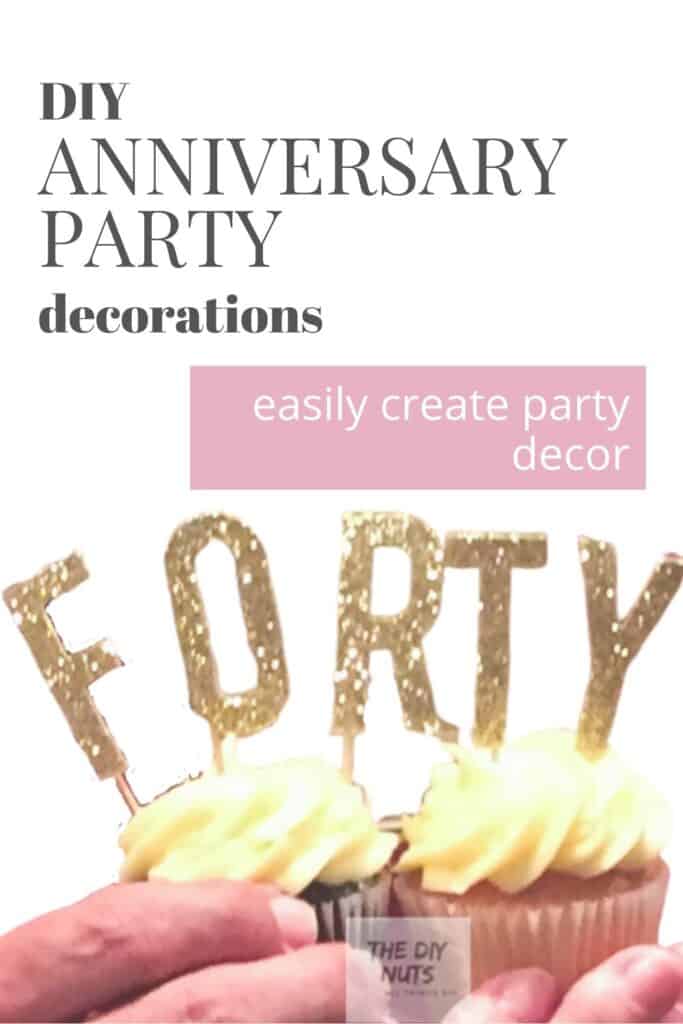 Besides having to feed 60 plus at this party, I knew I really wanted to celebrate my parents by coming up with my own DIY wedding anniversary party ideas and decorations

*Disclosure: I only recommend products I would use myself and all opinions expressed here are our own. This post may contain affiliate links that at no additional cost to you, I may earn a small commission. Read our full privacy policy.

There is no reason to spend a ton of money on an anniversary party. The most important thing is to show how much you love the deserving couple. These thoughtful decorations and ideas can do just that.

Yes, I do have several empty wine bottles available. You probably do, too!

Wine bottles are perfect for simple DIY crafts. You could use them to hold items or repurpose them to make centerpieces or vases. Sometimes spray paint or simple decorating can help you cheaply create party decorations.

Other ideas for simple bottle designs

Not only was this a fun anniversary wedding party idea, but it was an awesome way to display A LOT of old wedding pictures for their anniversary party. And let’s be honest, that is what it is all about. Celebrating the love and memories of the special couple.

In addition, my mom loved this wedding anniversary party idea so much that she took home a few of the bottles and had them on display for several months after the party.

How to easily remove wine labels?

The biggest pain of this DIY decoration or any sort of upcycled wine bottle is getting the label off. To get the label off the wine bottle, I soaked a paper towel in rubbing alcohol and left it on the label. After 10 minutes or so, you can then scrape the label off.

Get More Ways To Get Labels Off

Here is a great household hack using baking soda to help get those wine labels off for all your crafting needs or you can see our favorite sticker residue removal technique here.

How much did the picture holders cost?

This picture display was such a hit with the party guest and it was completely free! I already owned all the craft supplies used to create these DIY anniversary party decorations.

Read more>>>>Another time we used our favorite paint markers on these keepsake boxes for my kids.

This was simply done in Pages on my Mac. I believe you could create this on any device. Using a website like Canva (like I did in these inexpensive treat bags) or any other design software would work.

The wedding anniversary party guests got a kick out of reading this information. You could even try to create a game that involved people guessing some of that information first.

On this table, I also created a simple card that I printed on colored tagboard paper. I had a chalkboard sign asking people to fill one out for my parents.

Questions For Guests To Answer

I guess there is always a 50th wedding anniversary party!

Cut triangles out of blue burlap and used peel and stick glittery letters to put CONGRATS on the banner. The banner was held together on connected pipe cleaners and hung on our freshly painted mantel.

This banner was so simple to make because you really just have to cut the burlap, stick on the letters and use fun clothespins (these are super fun and come in several different glittery colors) to attach to twine.

Other Uses For Banner

I have used this DIY congrats banner for baby and wedding showers as well! It is great to just have it in a closet when I need it.

The glittery letters are the easiest. But you could also stencil on the saying you want.

Every birthday I display my DIY birthday banner which is triangles of tan burlap with blue stenciled on letters. I love that every birthday there is a DIY banner on display and not just some store-bought paper banner.

I made two types of sangria and had them out in two large mason drink dispensers. Small chalkboards are a great way to label each drink selection.

If sangria doesn’t sound great, here is a list of batch-made drinks you could try as a signature wedding anniversary drink.

We also had just light beer. Since this was a daytime anniversary party, it was perfect to just have a simple anniversary cocktail, instead of providing guests with a full bar.

Here are a few other things I did to make sure this DIY anniversary party went well. Sometimes a simple cake stand can make cupcakes look better or a specialty drink to not break the bank.

Use a Cake Stand to Display Cupcakes

Use a cake stand to display cupcakes. I simply ordered little yellow frosted cupcakes with white shiny glass-looking sprinkles from Sam’s club. They were inexpensive and looked amazing displayed on a large cake stand.

Yes, I am a DIY girl, but baking is not my thing.

I was also able to create a simple cake topper using gold peel letters (the same I used on the DIY Congrats Banner) and attached them to toothpicks to put on the top.

I am so happy that my parent’s 40th wedding anniversary party was such a fun and easy party to throw. From the simple DIY decorations to the memories shared by all, it truly was a memorable anniversary party!

I loved all of these wedding anniversary party ideas (and so did my parents)!

This site uses Akismet to reduce spam. Learn how your comment data is processed.

These are such lovely ideas and great photos to give inspiration for how it could love. Thanks for sharing!

Thanks, Freya. I am glad you love these easy DIY anniversary party ideas!

This site uses Akismet to reduce spam. Learn how your comment data is processed.

Hi, we are Erin and Eric. We are crazy about DIY projects. My husband and I love helping people make their house a home through projects you can do yourself! Read more about us…